Ramsha’s work feeds on deep suppressed frustration, disappointment, and questioning the born and nourished inside her through continuous observation of the traditional absurdity and pressure associated with marriages in society. A sense of belonging to a specific culture, values, and imposed traditions conflicts with the artist’s becoming.

The thoughtful yet embellished portrayal of a woman against ruthless and loud graffiti protests comments on the compulsory display in the name of marriage. The artist’s skilful approach in combining the decorated with vandalized speaks of the underlying frustration, helplessness, and endorsement of the forced-concealed and silenced beneath the extravagant veils of defined beauty. The crying yet composed works are desperate to protest but keep their calm, attempting to conform with society’s calling and standards.

Throughout history, considering women as a thing to be seen remains consistent, a curation inspired from the culturally directed perspective. Whether it is the portrayal of muses wearing extravagant layers of cloth in an old master’s paintings or heavily dressed brides, both are rooted in the same desire; the act of narrating women in a certain way. This long-running tradition of presenting women covered in jewellery and dresses heavier than the bride’s weight is neither an act of love nor an admiration of the superior, but it gives them a collectively approved identity that satisfies a defined way of seeing.

Ramsha successfully portrayed these notions in the paintings titled ‘Doondlo’ and ‘Potli’, as she hides the real beneath the embellished, conveying the loss of individuality. In this way, the artist sees the projected beauty as vandalism in disguise.

We always claim that humans are superior to all that is expensive or rare. Then, why is a woman’s worth always measured in karats. How can the expensive material represent the value of humans. Why is our belief mere hollow words when it comes to women.

Right: Potli, Ramsha Shaheryar Bhatty, oil paint and sequins on board, all copyrights retained by the artist 2022. 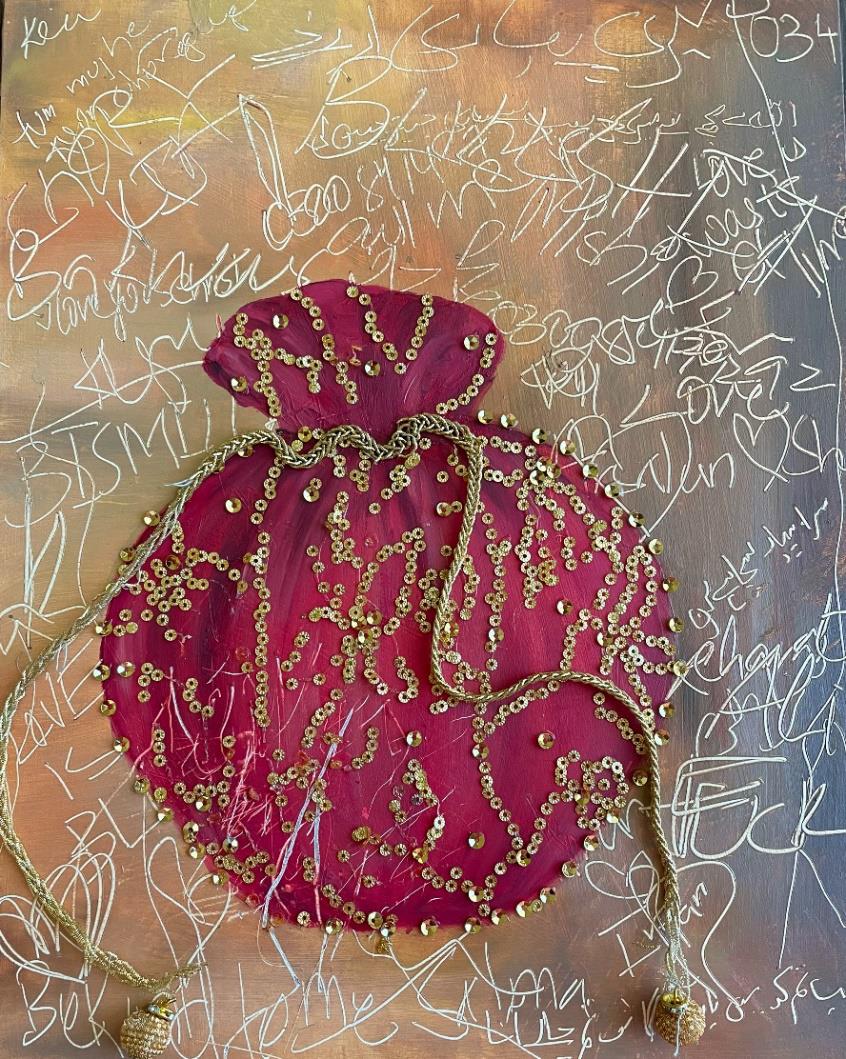