On the artistic experiences of Shobna Rathore

Shobna Rathore has been awarded a distinction in Miniature painting from CEAD MUET Jamshoro. She has showcased her work in a group show (Stories-2) at Shakir Ali Museum, (Bringing it together) by Artchowk gallery at State Bank Museum (Karachi 2020), Art Exhibition by Daachi Foundation) at Expo Centre, Karachi 2020, Emerging Talent at VM Art Gallery Karachi 2019, Group show and competition (Young Artist) at Al-Hamra Art Gallery Lahore 2019.

Her art interrogates and analyses Hindu Rituals and their meanings. She uses palm lines as a visual language to explores the system of the rituals like Diwali, Holi, Wivah (marriage), Rangoli, and their functions. She uses a variety of mediums as her material tool. Her queries are speculating the perspectives of religious culture, identity, and Hindu rituals. She takes palm lines as a verdict of fate and relates it with the system of rituals that are shaped by belief. According to her belief, these palm lines have concealed many verdicts of fate for her routine life happenings like marriage and other rituals. She wants to share her ritual ceremonies and their meanings with other communities like Muslims. She says, “the Hindu communities perform those rituals which are related to marriage zealously and they perform it without knowing the significance of these rituals. I want to explore the reason for performing these rituals and their association with women’s life. I want to share these through my artworks with the Muslim community”.

These rituals include Bidae (sending to in-law’s home) leaving hand impression on wall parent’s home as her presence, Ghar Pervaish (welcoming ceremony) of a bride, bringing bride into Doli and many others rituals. She revealed the reason for displaying the imagery of Goddess Lakshami into Doli as a bride that they perceive it as a source of bringing luck into their life. They hope the bride they have chosen to marry may bring wealth and prosperity to the bridegrooms’ life. They revere her like a Goddess Lakshami.

Her imagery displays a play of lines and shapes that are repeatedly placed on the surface. The composition and organization of elements show her in-depth concerns towards resolving the hidden decisions of her life. She uses red, green, orange, black, and white as her emotional language. She uses her handprints, figures, palm prints, and footprints for displaying association with her feelings for religion. Her imagery includes Hindu Gods, Goddesses, and simplified forms. Further, she shared her working process as she explored her painting technique first by doing a lot of experiments. She prepares her stencils for creating imagery and later applies her handprints for her unique and interesting ideas.

FOR THE MEANING, mono print, Shobna Rathore, All copyrights are retained by the artist, 2020 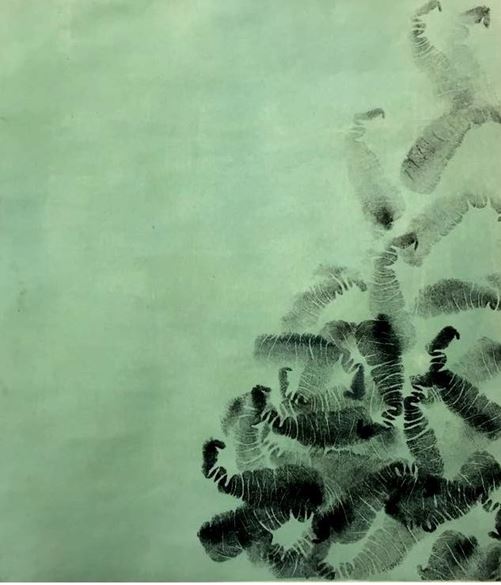